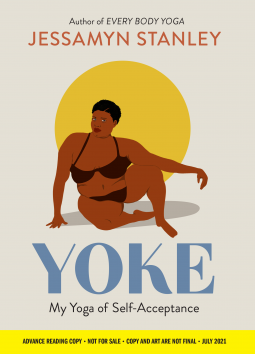 AMBER LOVE 10-MAR-2021 This review is a courtesy provided by NetGalley. To support this site and my other work, please consider being a monthly donor at Patreon.com/amberunmasked; you can also buy my books through Amazon (or ask your local retailer to order you copies). I’m also an Amazon Influencer so you can shop through my lists of recommended products.

Jessamyn Stanleyâ€™s first book, Every Body Yoga, with 59,000 copies in print, taught us how to do yoga. Now, in Yoke, she tells us why. Writing about what she calls the yoga of the everydayâ€”which is not just about poses but about applying the hard lessons we learn on the mat to the even harder daily project of livingâ€”Yoke presents a series of deeply honest, funny, gritty, thoughtful, and largely autobiographical essays that explores the issues of race, self-love, capitalism, sex and sexuality, cannabis, and more.

Drawing its name from a literal translation of the Sanskrit root â€œyuj,â€ from which the word â€œyogaâ€ derives, Yoke, invites every reader to find their own authentic â€œyoga of the everyday,â€ and learn to handle lifeâ€™s toughest moments with the same flexibility, strength, grounding energy, and core awareness found in a headstand or Tadasana or cobra pose.

I’ve been a fan of Jessamyn Stanley for several years. I believe it was seeing an image of her when I didn’t know her name. Then I saw her on Good Morning, America and was thrilled to finally learn her identity and follow her on social media. She has that kind of fame in the yoga world already and it happened fast.

When I read her first book, Every Body Yoga, I was a little disappointed in my own expectations. I thought it was going to be a book about how to get into yoga postures regardless of one’s size or shape. That ended up being only a small part of the book. It was a memoir which I was happy and curious to read. She bares all.

I had to wonder what could be left to tell about her history when I read the summary for Yoke and to paraphrase — EBY tells us how to do yoga and Yoke tells us why — I felt more confident in what the book would deliver. It is gloriously real and inviting.

Jessamyn Stanley does not shy away from vocabulary. She is fat, black, and queer. All terms she uses with complete openness. She invites others to stop seeing fatness as bad or not beautiful. There aren’t trigger warnings anywhere, but if you’re memoir reader, allow this review to be that warning for you. In EBY, she revealed unfortunate history regarding sexuality, sexual assault, and feelings of confusion about what women are supposed to control in their own bodies. In Yoke, she tells a couple of stories that I wish were unbelievable, but they are sadly, too relatable and easily believable. Even this person I see as a celebrity still gets assaulted and it keeps happening! You can tell by her own words that she is shocked it keeps happening and snowballs into self doubt, embarrassment, and shame.

In my opinion, Yoke should be required reading in all western (re: not in the Middle East, South Asian, or Far East Asia) yoga teacher trainings. I got more out of Yoke with its chapter introductions of Swami Satchidananda’s sutras and Stanley’s authentic lessons about her yoga journey than I did from reading the tome of B.K.S. Iyengar, Light on the Yoga Sutras of Patanjali. While Patanjali is considered the source of yoga training, what we need in today’s world is to hear from voices like Stanley who struggle against self-doubt, body positivity, equality, racism, misogynoir, homophobia, and white supremacy in yoga. Yeah, even in yoga all that shit is still there and Stanley points it out.

Oh, you think we’re all part of the greater Wholeness of the Universal Energy so race doesn’t matter? Ha! There are still classes filled with mostly white women and specifically thin, able-bodied, white women (who can afford to be there). Like Stanley, I was the only fatty in my yoga teacher training. I was also from a poorer area of New Jersey unlike my Princeton suburb classmates. But, our teacher was a fierce, black Haitian woman with endless energy who gave us her all. I wish Jessamyn Stanley had had a teacher like mine.

This does bring up how yoga has historically had a guru-student relationship and that we should not deify our teachers. Outside of Stanley’s book with her own personal stories of being let down by what goes on in the yoga classroom, there are people like Bikram, Iyengar, and others who abuse their power and abuse their students. Stanley does discuss the Jivamukti yoga film her class watched during teacher training. She was the only one to call out Jivamukti’s founders, Sharon Gannon and David Life, for perpetuating the unhealthy racism with their western pastiche of South Asian culture. Stanley said they “managed to roll all the most annoying parts of American yoga culture into one video.”

Gurus and teachers can let you down.

Like in EBY, Stanley shares her heritage with the Baha’i Faith and how she noticed that it too, despite it’s interracial tolerance, was still homophobic. No matter what subject Stanley introduced, readers are going to get cold hard lessons on reality about what’s considered progressive.

Yoke is well-organized and weaves the sanctity of yoga into the modern world and how it has affected Stanley’s adult life. There’s a saying in yoga: the pose (asana) you least want to do is the pose you should do. The same can be said for addressing what ills the yoga industries. If you don’t want to discuss racism and fatphobia, then you’re probably the one who needs to hear that conversation from the people who are targeted. Her chapter on meditation is invaluable. She begins by saying she never thought she would meditate and now it’s a part of her daily routine.

Yoke ends with Stanley discussing her marijuana usage. She isn’t preachy about it. She admits it’s not for everyone, but it helps with her yoga by calming her mind. There are sweet stories about her grandmothers and how different they are, yet they have their own type of magic that they bring to the world. That’s more of the point than go get high. It’s about the need people have when they come to yoga to be who they are meant to be without any mask.